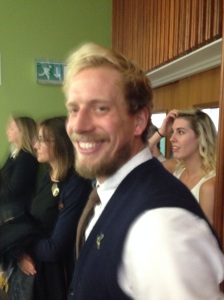 Last Summer, blinded by the sun, I saw a silhouette coming towards me. He was on a skateboard, gliding down the centre of the High Street. All I could see was the athletic outline of his body and his bright blond hair. Too cool for Exeter, I thought, as I pedalled uphill on my clunky bike, Jonny Rowden smoothly passing in the opposite direction.

Jonny first joined the Bike Shed as am employee of The Plant, the yummy vegetarian cafe on the Cathedral Green that opened and ran the Bike Shed’s cafe in 2010 and 2011. Whilst serving people with his impeccable grace and manners, Jonny was also undertaking a Masters degree in performance at Plymouth University. We made use of his creative skills in rehearsals for The Little Prince and a few months later he was part of the cast for Clifford Odets’ Waiting for Lefty. Why his improvised line “I can’t read” made me laugh so much, I can’t adequately explain. I think it has something to do with truth of character and timing. But it could just be that Jonny makes me laugh. When you think of him, you smile. He’s one of those people.

In 2012, Jonny ran our cafe, working hard underground to implement a menu of tasty platters and tapas. His attention to detail, balancing flavours, made me look forward each day to what Jonny had prepared. He also has the obsessive precision to make the perfect flat white.

Following a spell in Brazil, Jonny returned to Exeter to focus on his theatre work. And so, in May of 2014, he joined with Kelly Miller to pitch an idea for a performance in the Exetreme Imagination children’s literature festival. The brilliantly simple idea: Aesop’s Tortoise and Hare, but instead of a race, Tortoise prepares a slow-cooked healthy meal quicker than Hare can order a takeaway. And it’d be for five-year-olds. Oh, and the children would help make the food.

The resulting show, AMINAL’s Tortoise and Hare, Making a Meal of Storytelling, was one of the most original, engaging shows I’ve seen. Charming, witty and constantly engaging, the show also had children eating food they’d normally refuse to touch, One parent whispered “he thinks he doesn’t like carrots”. This show returns in the Summer and if you didn’t catch it, I’d recommend pretending to be a child and coming along.

For me, Tortoise and Hare is a perfect reflection of Jonny. Whilst it was considered and important, it didn’t take itself too seriously. Much like our skateboarding hero.