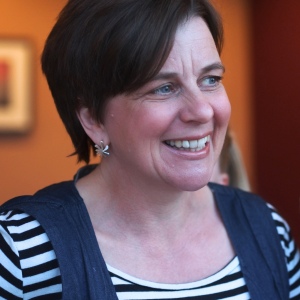 It is the best short play I’ve read. Exposure arrived through my letterbox, delivered by hand. The dialogue is varied and perfectly observed, the characters honest and flawed, the humour gentle and true. Nothing is superfluous. The subject matter is dealt with sensitively, the ending consequently gently moving. We showed it in a rehearsed reading in April 2010, directed by Charlie Coldfield.

In our first full season, we wanted to do a play set in Exeter and invited suggestions. Sam’s idea was a play about friendship and magic, set during the Second World War. I pushed Sam to consider the characters’ contemporary equivalents and encouraged her to play more with the mystical elements. The resulting play, Serendip, became a production directed by Nick Stimson. The theatre space not yet being signed off, our bar was filled for eighteen nights with packed audiences watching from sofas and bar stools.

I had the pleasure of working with Sam again for Theatre West in 2013, before she took a break from writing. Her voice is developing wonderfully and she’s exploring supernatural elements that had become unpopular in the twentieth century British theatre. Her next play, when it comes, could well be phenomenal. I can’t wait to read it.